My First Half-Marathon As A Mother!

What A Journey It Has Been

Running the Munich Sportscheck half-marathon was extremely important to me.  It somehow was a benchmark for my progress along my journey back to fitness after having children but even more so it was a marker for my mental strength.  Before having children I had found running and bootcamp training to be an important outlet for my anxiety.  I guess I have chronically been a person with anxiety and had coped poorly with it.  Generally I turned to food to deal with my emotional highs and lows. Soon I found myself overweight and out of shape. When I started running not only did I shed pounds, I shed the emotional weight that I had been carrying around for years.

I always said having kids will not change this new healthy habit.  For the most part I didn’t change it.  I was very active through my first pregnancy but had some pelvic floor issues with the second pregnancy that had me on a forced break.  Getting back to running was so important to me because I knew the benefits it had on my mental health.  After undertaking the Spartan Race in the spring I decided it was finally time to get back to that middle distance running that provided me with that natural high. I came across the Sportscheck Run and said to myself…hell YEAH!! I’m doing this.

Training For The Half-Marathon

Considering I had trained very intensely for the Spartan Race, getting back to running longer distances was relatively easy.  I was able to transition my training quite smoothly to start adding kilometers each week in order to prepare for the 21km run.  I had 9 weeks to get myself race ready, not quite a lot of time but enough takin into account that I had been working on my endurance and overall strength for the previous 3 months.  In order to prepare I had to create a running plan.  I used an old training program from when I ran my first half, the Nike Women’s run in San Francisco back in 2011.  I adapted the program according to my current level and how many weeks training I had.  It all seemed to work out perfectly.

When Plans Go Off Track

All was going according to plan when I caught the worst cold in ages.  I tried really hard to not swerve off track but after adapting and adjusting I just simply had no other choice but to take a training break.  I was so congested and I just could not breath properly and felt wiped out.  This was tough…but to add insult to injury I then had a random resurgence of back pain (related to my herniated disc. Perhaps it was the sudden load increase that aggravated my symptoms and I was feeling like I was back at square one.

I really started to worry if I would be fit and ready for the race.  I had decided to try to beat my old PR of 2:01:00 but was getting the sinking feeling this was not going to be possible with such a long break during the training program.  I thought to myself that I cannot allow myself to get caught in this mental trap of self doubt but I also had to be realistic because I did not want to end up with an injury that could have me out for a longer period.  I thought to myself, what do you do when things fly off the rails and do not go according to plan?  You adapt and adjust your expectations and training.  You keep an open mind, you respect your body and it’s limitations.  Not to say, lower your standards but being realistic and open to all possibilities can lead you to surprising yourself in the end.

The morning of the race, honestly I woke up with some serious fear.  #1 it was insanely HOT!!  I strongly dislike running in heat.  #2 I was majorly jet-lagged.  We had returned from a two week trip in Canada just a day and a half prior and my body was still in another timezone.  #3 I had been so off track my training plan I was doubting my ability to even finish, let alone achieve a new PR.

I got my butt out the door and tried to channel all that energy into positive vibes. I arrived with only a few minutes to spare, thank you very much MVG for having so many detours on the Ubahn on Sundays!! Once I arrived I could feel my heart pumping and started to have that flood of excitement that you get before a race.  There is something about so many people coming together for a challenge like this.  Everyone has their story and reasons why, but we are all chasing that same HIGH!  There is something euphoric that happens when you put your body and your mind through such a test.

The race began and I was feeling pumped, excited and SCARED!!  Again, the flipping HOT temperatures had me sweating before I even got moving.   I started out according to my planned pace and was thinking to myself, NOPE, not happening today! I quickly understood that I would have to adjust my goal and FAST.  I was 3 kilometers into the race and could feel the hot spot forming a blister on my right heel. I was massively hot and thirsty.  Thankfully I had brought my water belt with me and was able to drink and sprinkle some water on my head and neck to cool off.  I knew at that point I would have to slow my pace otherwise I wouldn’t make it to the finish line.

I was just after the half way mark and I just had no choice but to take a walking break.  My heel had a fully formed blister by now and the heat was really getting to me. (Did I mention is was about 35 degrees?) Although running through the Englischergarten is quite shady the heat was real.  I took a short break and got back to it.  Come to kilometer 15 or 16 this is when things really started to become challenging.  I had seen one gentleman lose his stride and literally eat dirt and a young lady being tended to by paramedics.  I was starting to think, I’m next.  My hands were swollen from the heat and I was feeling heavy.  At each water station I poured about 4 cups of water over me to cool off and drank what I could. As I reach kilometer 19 I had needed several walking breaks.  It was very much a mental game at this point, I had to physically slow down so that I could conserve energy and not collapse from the heat.  I passed several collapsed runners and told myself I wouldn’t be one of them.

It was not the finish I had hoped for, in fact I was 9 minutes slower than my last PR.  You know what, none of that matters.  I made it, healthy and SOOOOOO HAPPY!!  I couldn’t be prouder of myself for what I had accomplished in this race but more importantly over the last 4 years.  I have put so much effort into personal growth, overcoming depression and finding myself again through fitness.

My two beautiful children and my husband were waiting for me at the finish line.  My oldest who smiled so proudly saying that “mommy won the race” because I had a medal around my neck.  I realized that making them proud, being a positive example of setting a goal and pushing through to the end is what gives me the most joy.  I want them to know that they can go after anything in life.  Anything is possible if you work consistently towards it. 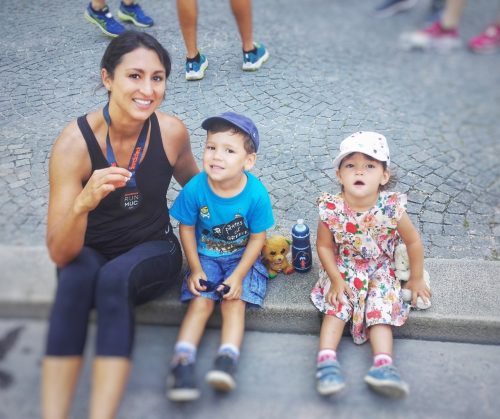 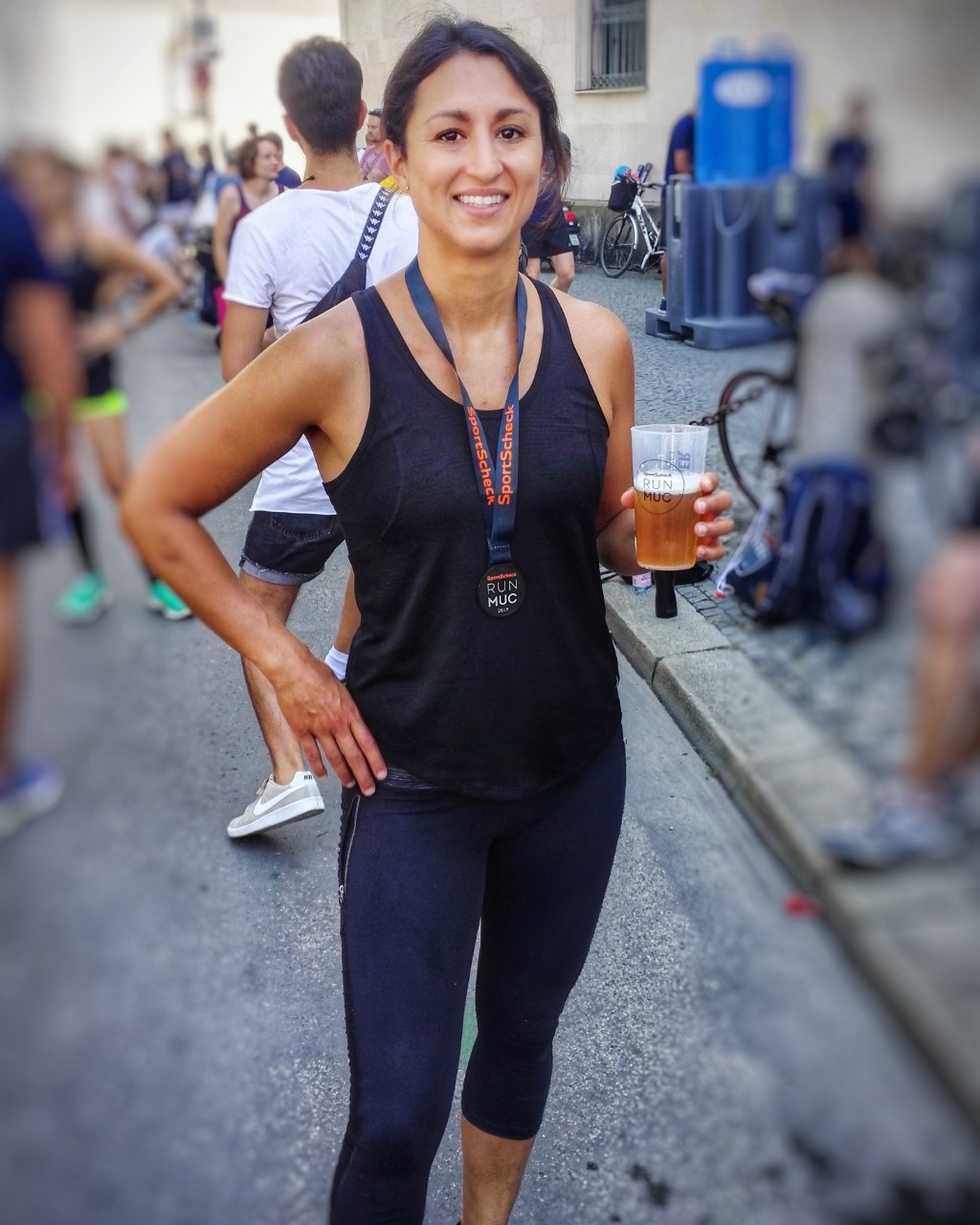 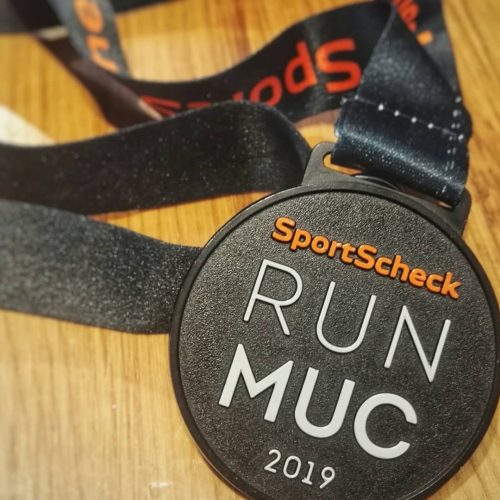 My First Half-Marathon As A Mother